It’s always embarrassing when your brain stops working. (And we’ve all had those moments.) It’s especially embarrassing when it happens in public, and it’s downright humiliating when you make your living with that brain – and you have a title like “ Global Professor of Management and Strategy and Director of the Center for the Globalization of Education and Management at the New York University Stern School of Business.” Not to mention “Anselmo Rubiralta Professor of Global Strategy at IESE Business School in Spain.”

So if I was Pankaj Ghemawat, I’d be furious that the Harvard Business Review has just shared on Twitter an absolutely jaw-dropping example of brain freeze – his December article titled, “If Trump Abandons the TPP, China Will Be the Biggest Winner.”

Like way too many other backers of the Trans-Pacific Partnership that’s been just killed off by President Trump, Ghemawat seems completely unaware of some basic facts about TPP’s relationship with China. Like the fact that, even though the deal was widely touted as a means of containing the PRC’s rising economic, political, and military power, the negotiators gave Beijing a wide open back door into the new free trade zone. How? By permitting large numbers of manufactured products to be sold in TPP countries duty-free even if they contained high levels of Chinese content.

As a result, China would not only enjoy many of the benefits of TPP membership without incurring any of the obligations. Worse, it would reap these economic rewards without arousing the attention of economic interests struggling against often predatory Chinese competition.

But unlike most TPP supporters who have focused on the supposed China angle, Ghemawat has introduced an argument that is not simply lame, but transparently so.

It has to do with with this map he included in his piece. 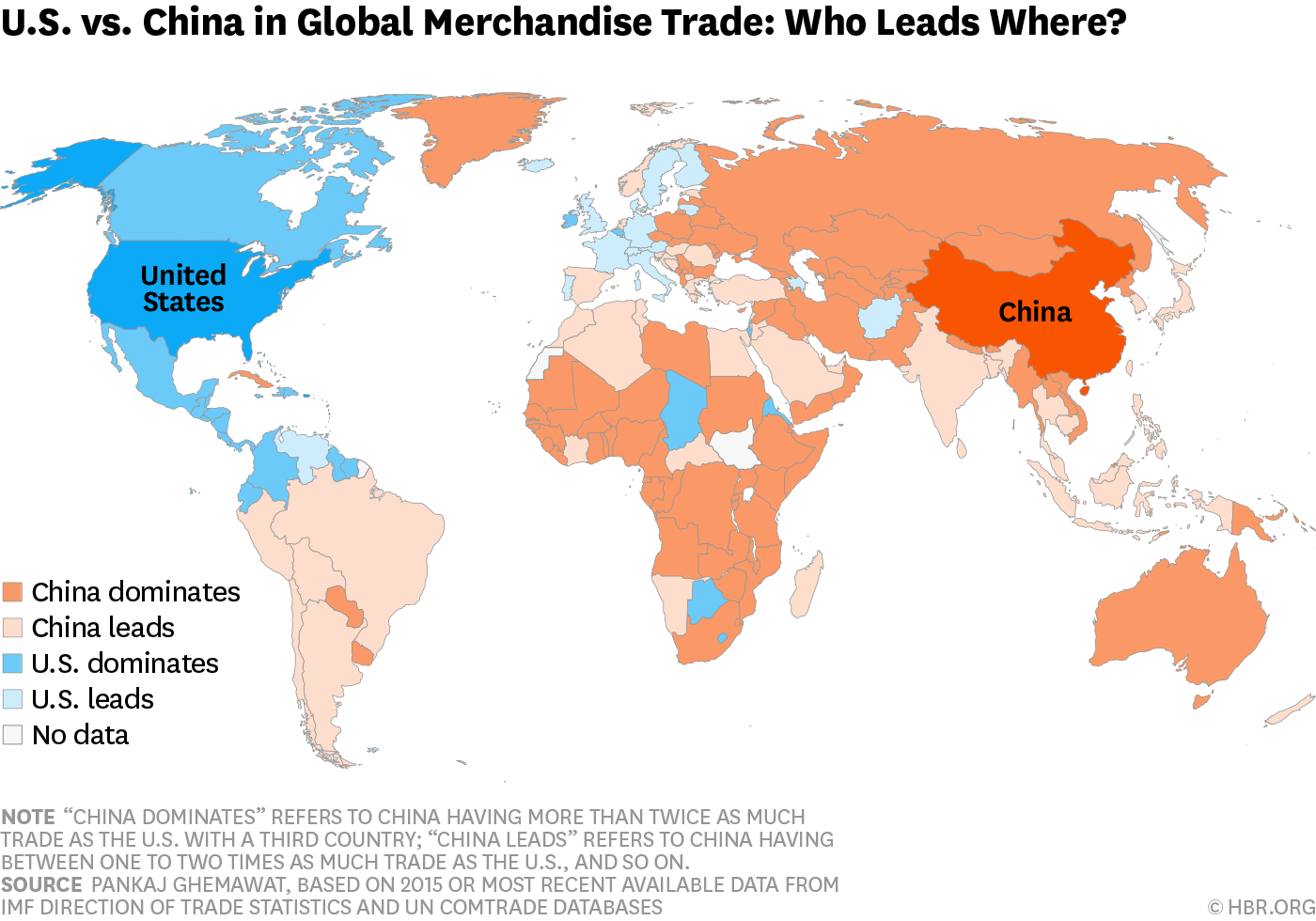 Its purpose is illustrating Ghemawat’s claim that Mr. Trump’s decision to pull the TPP plug is a big win for China by showing which countries trade most with the United States, and which countries trade most with China. According to the author, the map shows that “The U.S. leads in a few places, particularly in the more proximate parts of the Americas, but China leads more broadly.” Even more worrisome (allegedly), “Extrapolations indicate that by 2025, the Chinese sphere of trade leadership will extend even farther, with the U.S. forecast to lead only in the part of the Americas that is north of the equator.”

But if Ghemawat’s brain really was working when making these claims, it seemed to have convinced him that the countries taking up the most land area are the most important economically and strategically. To which the most respectful reply is, “You can’t be serious!”

After all, think just for a minute about all those geographically enormous regions where trade with China is dominant, or where the Chinese lead. Much of it is sub-Saharan Africa, which is economically inert. Much of the rest is Russia and Eastern Europe – no great prizes economically. The same goes, in spades, for South America.

Three major economies are indeed on this list: Australia, Brazil, and Japan. But the first two are mainly raw materials suppliers to Chinese manufacturing. They also compete with American farmers and ranchers for global markets, but the last thing they want to do is to start buying lots in the way of U.S. agricultural products.

As for Japan, it’s obviously extremely wealthy. Indeed, it’s the world’s third largest single national economy (behind the United States and China). But it’s been growing very slowly, at best, for many years, and its markets are hermetically sealed both in agriculture and industry. And much of its trade with China consists of sending the PRC parts and components of advanced manufactures that the Chinese assemble into final products and then export – often to the United States.

Further, the same goes for most of the other important Asian countries where China holds the trade lead that so impresses Ghemawat. Sorely inadequate American trade data makes presenting precise numbers impossible, but how else can it be explained that nearly every economy in the region runs hefty trade surpluses with the United States?

Finally, it’s vitally important to remember this export orientation when thinking about the one country on earth where China trade dominates, according to the author’s map: China itself. Exports – and more specifically, amassing trade surpluses – have long been and remain crucial to China’s growth, and in turn to its political stability. And the United States is a big part of this picture. Even China’s own (often dubious) economic data reveal that nearly half of its annual trade surplus is run with America.

China is an important market for U.S. exports as well. But as with its Asian neighbors, it’s a much smaller final consumption market because so many U.S. sales to the PRC also are parts of components of finished goods that then get sent abroad – frequently right back to the United States. And even the deeply misleading aggregate trade data make clear that in absolute terms, the Chinese market is incidental to the American economy, and even more so to its growth.

Karl Marx, who was wrong on a great deal, once famously wrote that, “History repeats itself, first as tragedy, second as farce.” Ghemawat’s article is strong evidence that TPP defenses (and lamentations) are well into the second stage.