The debate over whether American wages are rising or not continues apace. Hopefully, if only for the sake of competitiveness, the optimists will come up with offerings better than Conor Sen’s column on Bloomberg today. He claims that breaking workers down by age group shows clearly that the only cohort of the workforce suffering anything close to wage stagnation is the huge generation of Baby Boomers.

According to Sen, data from the Atlanta branch of the Federal Reserve demonstrates that the slow wage growth of the Boomers is dragging down all of these pay figures – but that this problem will steadily fade away as they retire. And because the economy keeps generating huge numbers of job openings, and because so many businesses are reporting labor shortages, the wage “tailwinds” for younger workers are going to be “great.”

Unfortunately, understood properly (i.e., examined for the entire time span of the Atlanta Fed data series Sen is touting), the numbers tell a very different story. It’s true that wage increases get bigger the younger the worker, as the Atlanta Fed chart below shows. But the more important trend illustrated is that, for all generations of workers tracked, this wage growth has weakened over time. (It’s important to note that these statistics are tracking wages of different age groups as they exist in any given year. They don’t examine the wages of age groups as they age.) 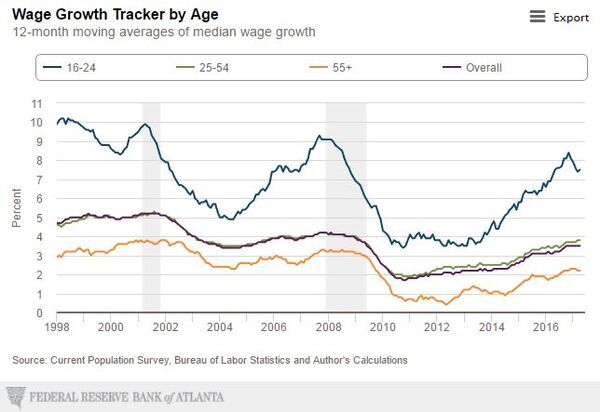 You can easily see this trend by just eye-balling the chart. Although wage increases have experienced ups and downs for all age cohorts, each successive peak since 1998 has been lower than the last. Nor are your eyes deceiving you.

The interactive feature of the chart (which can be used in on the original on the Atlanta Fed website linked above) makes clear that, measured by twelve-month moving averages, median wage growth for the workforce as a whole peaked (before inflation) in the spring and summer of 2001 at about 5.2 percent. For workers aged 16-24, though, wages then were surging by roughly 9.5 percent (slightly less than in the late-1990s), for those in the 25-54-year old group, the figure was between five and 5.2 percent, and for that year’s workers older than 55, only about 3.7 or 3.8 percent.

The next high for the overall workforce came in the fall of 2007 – just before the Great Recession hit. Overall wages were still rising in pre-inflation terms, but only at 4.2 percent. That was also the rate of increase recorded in wages for the 25-54 cohort, while wages for older workers were improving by only about 3.2 or 3.3 percent a year. The best performance was put in by the young, whose wages were increasing by 9.3 percent. So these peak figures were lower for all groups of workers than the previous one.

The next wage peak has come this spring. But overall wages have only been rising at a 3.5 percent annual rate. The 25-54-year old age group has done a bit better – 3.8 percent. But that’s lower than their last peak increases (4.2 percent). The boomers’ rate of increase is a thoroughly unimpressive 2.2 percent – also lower than this cohort’s progress just before the recession struck. Although younger workers are indeed doing much better than that – their paychecks have been growing by 7.5 percent – but that pace is much slower than the 9.3 percent increases registered a decade ago. Moreover, just last November, the wages for the 16-24s were improving at an 8.4 percent annual rate. So for the time being, they’re already past peak.

In other words, although younger workers have consistently out-earned older workers for the last nearly two decades, their rates of increase keep trending lower and lower. And guess what? Everything we know about biology tells us they’re going to get older – and therefore presumably move into the age groups whose wages haven’t risen nearly as fast.

Past isn’t always prologue, and it’s indeed possible that this secular decline (in relative terms) could be broken in the years ahead by any number of developments – like continually sluggish productivity growth or the emergence of genuine labor shortages throughout the U.S. economy. But it seems just as likely that recent wage-depressing developments will continue and new ones will emerge. More automation is certainly conceivable, as are higher immigration levels (especially if President Trump’s political fortunes don’t take a turn for the better), and the arrival of a new recession. (The latter is almost certainly a matter of “when,” not “if.”)

Here, though, is what I am pretty confident about. Few Americans are going to look at the Atlanta Fed chart showing steadily lower highs for young workers’ wage increases and conclude that Happy Days Are Already Here Again on the paycheck front.