Polls like today’s Gallup survey that try to assess what national issues and problems are foremost in American’s minds are terrifically valuable, especially as big elections like the 2020 presidential race approach. Trouble is, Democrats and Republicans and independents of all kinds will struggle to find clear trends marked out in this morning’s survey, much less derive strong comfort from it.

The difficulties start with Gallup’s overall findings about how high various major issues rank on the public’s priority scale. Competing fiercely for the top spot, and mentioned more than twice as often as the next concerns, are “The government/poor leadership” (cited by 23 percent of respondents – in this case, “US adults”) and “Immigration” (cited by 21 percent). And to be more specific, the government/leadership option offered by Gallup included “Congress” and “politicians,” not simply the President. “Immigration” wasn’t further elaborated on.

In principle, some more light might be shed on who could benefit most from this poor government finding by examining the trends over time. But as the chart below shows, although the importance of the overall government issue began rising notably right after the last presidential election (indicating that President Trump is causing most of the anxiety), the ranking became unusually volatile in the middle of last year, and has stayed that way – including through 2019. This year, of course, has seen an unpopular partial federal government shutdown most often blamed on Mr. Trump, rising levels of partisan rancor, and the climax (for now) of the Russia scandals investigation. On the whole, though, it seems reasonable to conclude that this issue is cutting somewhat against the President. 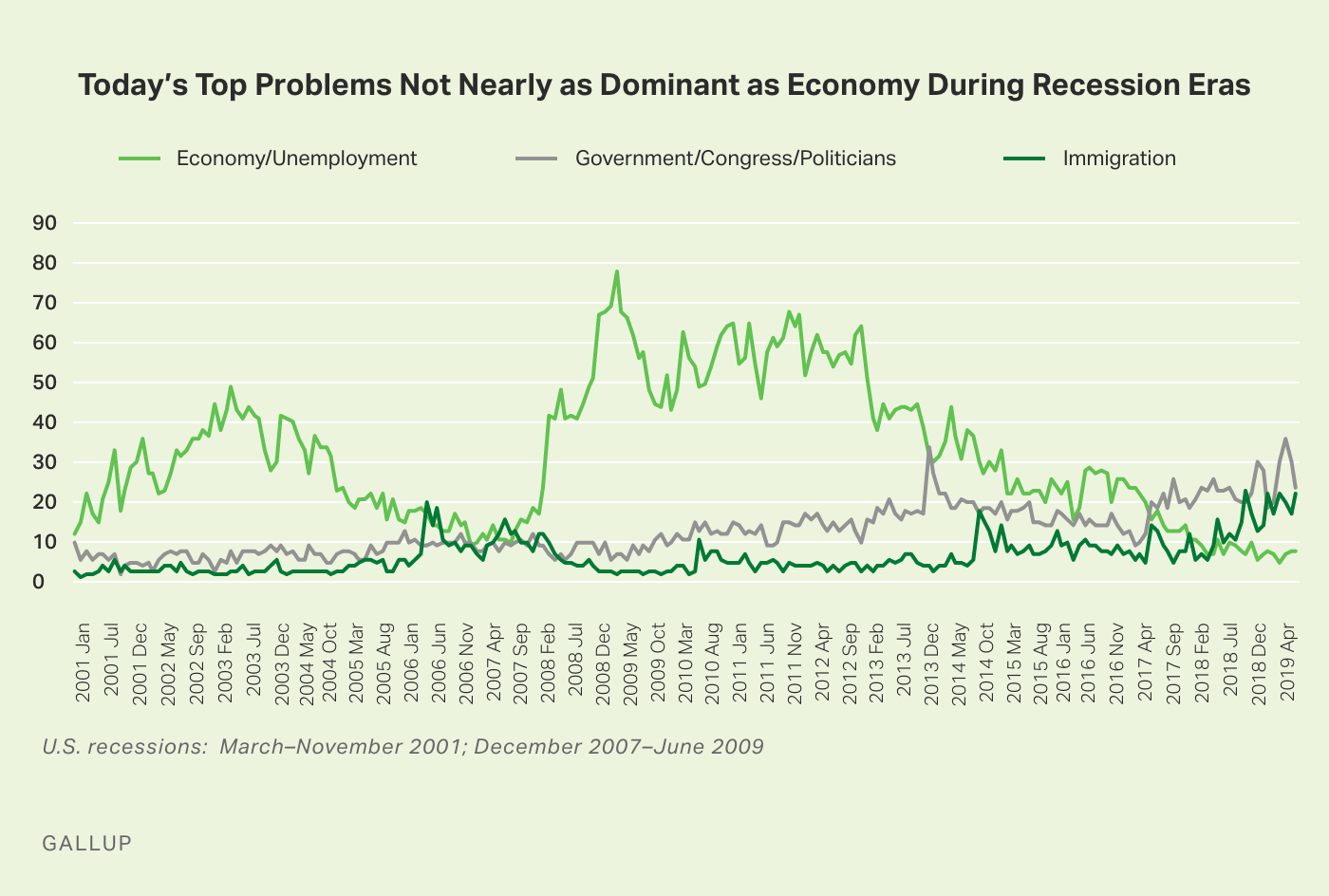 Some evidence to the contrary, however, comes from the current separate figures for Democrats, Republicans, and independents. Democrats express the most concern about the quality of government and leadership, with 32 percent pegging it as the country’s top problem. But although only 21 percent of Republicans chose this option, that result was much closer to that of independents (19 percent) than the Democrats figure. Both independents and especially Republicans are much likelier than the Democrats to blame government failings on the Democrats who now control the House of Representatives, and therefore wield much more power in Washington than during Mr. Trump’s first two years in office.

Using these criteria, the Gallup immigration findings look even more promising for Mr. Trump. It’s true that using that single noun to describe the issue masks the distinction between respondents who consider current U.S. policy too restrictive or not restrictive enough.

As for the rest of the issues mentioned in the Gallup survey, the responses seem to offer hope for both parties. Relatively little concern is expressed about matters such as the economy in general, unemployment and jobs, poverty, and inequality – which looks like good news for Republicans and for the President, since these results clearly signal satisfaction with the so-called pocketbook issues. Ditto for the measly three percent figure recorded for climate change and other environmental issues combined, and the failure of gun violence even to make it into the rankings.

At the same time, Democrats should feel pretty pleased that “Ethics/Moral/Religious/Family decline” alarmed only three percent of respondents, and “Crime/Violence” topped the list for only two percent.

The most puzzling message sent by the Gallup results concerns healthcare – which, it’s widely agreed, helped the Democrats greatly during last year’s midterm elections, and could be a winner for them again in 2020, especially if Mr. Trump continues his war on Obamacare.

The seven percent of the public naming healthcare as the country’s biggest problem resulted in the third highest such score (behind “The government/Poor leadership” and immigration). But especially given its enormous importance for so many families’ finances no matter how the Obamacare fight turns out – and potentially into the future if the White House and both houses of Congress are won by Democrats seeking to expand coverage dramatically – seven percent is hardly astronomical.

But how should this number be interpreted? If it signals overwhelming satisfaction with the status quo, however uncertain its durability is Republicans could benefit – but probably only if they make clear that they won’t go for major change, either. Since Obamacare (officially known as the Affordable Care Act) has shaped the status quo, Democrats in principle could take heart – particularly if their most ambitious ideas on this front fall by the wayside.

And here’s the partisan split (which I don’t think undermines the above analysis): Healthcare is seen as America’s leading problem by three percent of Republicans, seven percent of independents, and 14 percent of Democrats.

This Gallup poll’s findings that so many different and even clashing concerns are troubling Americans these days – and in so many possibly different ways – could understandably be seen as evidence that Americans are hopelessly far from agreeing on national priorities. I prefer a more optimistic take: There’s a new winning consensus and lasting political realignment in the making if only the nation’s political leaders could break out of their ideological straitjackets and build it.

1 thought on “Im-Politic: Signs of Hopeless Division or Potential Unity?”