Is it time to start putting the CCP Virus economy-reopening debate shoe on the other foot, at least when it comes to one key measure of progress or backsliding against the pandemic? More specifically, is it time to put less emphasis on finding out whether states that have reopened relatively quickly have seen their virus situations worsening, and more on whether states that closed early and/or have stayed largely closed have achieved progress that’s been any better?

This question occurred to me this morning upon reading in my Washington Post that when it comes to new infections and fatalities, Virginia has just seen record highs recently whether we’re talking about single day totals or the more informative seven-day averages. That’s striking because Virginia has been one of those states that shutdown substantially quite early, and has reopened very slowly.

So I began wondering how Virginia’s record compares with a state that reopened very early – Georgia. And the numbers clearly show that their performances over the most relevant timeframes have been…pretty comparable. Which represents new evidence that the economically devastating lockdowns have been under-performers for containing the virus’ spread.

Virginia and Georgia are particularly interesting to compare because of their similarities. The latter’s total population is estimated this year at 8.63 million while the latter’s is a not greatly bigger 10.74 million.

Both states also have relatively big populations of African-Americans – who have been among the virus’ biggest victims. Blacks represent 31.03 percent of all Georgians, and 18.81 percent of all Virginians.

That Washington Post Virginia article did mention one area of continuing improvement for the state: new hospitalizations. They’re especially important both because fears of hospitals getting overwhelmed by the pandemic were prime justifications for the original shutdown orders, and because they’re the best measures of whether the virus is being contained or not. After all, numbers or new cases seem to depend heavily on increases in testing (which naturally reveal more and more infections). And controversies over identifying genuine CCP Virus-induced deaths remain heated – in large part because methodologies vary so greatly state-by-state.

By contrast, there have been no debates over how many patients with virus symptoms have been admitted to healthcare facilities. The only uncertainties are those stemming from how promptly these facilities report their admissions to state health departments.

That kind of uncertainty is still clouding Virginia’s data. As of today, (see this link and scroll down till you see the option for hospitalization data) the state has only reported new hospitalizations through May 20, and these data are divided between confirmed cases and probably cases. (The former are the great majority, though.)

Even so, because of Virginia’s lockdown policy – which began in earnest at the end of March, began easing in phases for the state’s least populous areas in mid-May, but which largely continue for its most populous areas (those closest to the District of Columbia)– it should be among the gold standard states for virus progress if turning off most economic activity is considered crucial. (Here’s an unusually informative lockdown timeline for Virginia, Maryland, and the District.)

Its interactive hospitalization chart is a little hard to read, but it seems to show that on March 31, the seven-day moving average of new admissions stood at just under 59, and through early May (when the lockdown began to be lifted). moved up steadily to a little over 81. So they rose by just under 39 percent. By May 20, this average had decreased all the way to just under 45. In other words, daily hospitalizations dropped by a little less than 45 percent. And for the entire period, the seven-day moving average for new hospitalizations dipped by 2.34 percent.

Georgia’s lockdown began only a bit later than Maryland’s (on April 2) but serious easing began much earlier (on April 24). Indeed, Governor Brian Kemp was widely pilloried for the decision.

During its three weeks of lockdown, Georgia’s seven-day average daily hospitalization numbers went from about 80 to about 130. (The non-interactive chart below is even harder to read precisely than Virginia’s interactive graphic, but check it out for yourself below.) 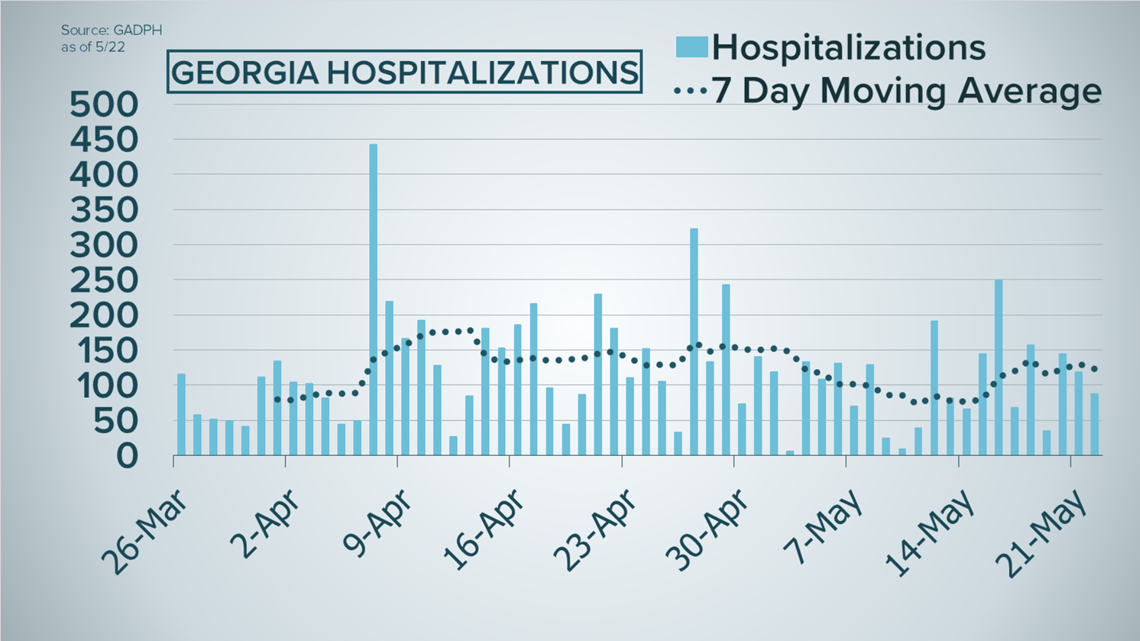 This roughly 62.50 percent rise in daily hospitalizations was much higher than Virginia’s during its lockdown period Did this discrepancy mean that Georgia ended its lockdown too soon? Or was its somewhat heavier African-American population density the major difference? Search me.

Georgia’s reopening has been more aggressive than Virginia’s, and that could well explain why its seven-day average hospitalization figure remained just about flat from the start of this phase through May 22.

But I’m not entirely persuaded that the lack of improvement during this period means that Georgia’s relatively fast reopening has flopped. Because for the first three weeks of this reopening, the state’s seven-day average new hospitalization figure fell by about half – faster than Virginia’s during its slower reopening. And as the Post has reported, despite Virginia’s caution, daily (although not yet seven-day averages) have been rising recently, too.

The fairest conclusion to me seems that the hospitalization data give an edge to Virginia’s more cautious lockdown-reopening strategy, but that the edge is on the modest side. And most important, it’s far from clear that this margin justifies both the economic and healthcare costs of relatively longer and/or more thorough lockdowns.