I totally get that Joe Biden would want to throw cold water all over this past Thursday’s U.S. jobs report (for June), whose reported massive gains smashed expectations for the second straight month. He’s virtually certain to be formally named the Democrats’ presidential nominee this year. Therefore, he naturally has a strong interest in portraying the state of the nation, including its economy, in the worst possible terms.

I also totally get that the nation’s media would report Biden’s gloom-mongering. He’s a major political candidate, and what he says is by definition news.

What I totally don’t get is how none of the country’s pundits and other political analysts have caught the glaring weakness and equally glaring internal contradiction in Biden’s core claim that a million more Americans “would still have their job if Donald Trump had done his job.”

The weakness: Biden apparently is charging that the President should have shut down the economy and strongly recommended mask-wearing and social distancing measures (which of course inevitably have their own, independent economy-depressing effects) much earlier than he did (the first such Trump action – a stay-at-home guidance – came on March 16). As a result, he suggests, the U.S. jobs market would be in much better shape.

But as reported in this Washington Post examination of Biden’s CCP Virus record, nothing of the kind had issued from the former Vice President or his camp by that time. So much, therefore, for any contention that he’s been especially prescient when it comes to the virus’ impact on the economy and on employment in particular.

The contradiction: Let’s say that Biden had indeed recommended a much earlier shutdown – and that the Trump administration had taken his advice immediately. And let’s suppose that the President’s record had been much better in terms of testing and contact-tracing – which Biden has called “the key to restoring enough confidence for businesses to reopen safely and consumers to reengage with the economy” (as opposed to what he has described as the President’s reopening plan: “just open”). Would the massive job losses suffered by the U.S. economy have been avoided, as Biden has suggested? Would even “a million more Americans” be employed – and presumably safely employed (a number whose source I haven’t found, and that represents a small fraction of the 15 million jobs that remain lost since the CCP Virus’ full effects began to be felt)?

Biden and many Americans clearly would like these claims to be true. But good luck finding any supporting evidence. Indeed, everything we know about the anti-virus efforts even of countries that allegedly have dealt much better with the pandemic reveals those expectations to be wholly unrealistic.

Germany is probably the best example – since it’s not a totalitarian dictatorship like China that can lock down massively while truly trampling on the few individual liberties it ever allowed the slightest breathing room. Even so, it’s been widely depicted as the gold standard for anti-virus success.

To summarize, on March 22, Chancellor Angela Merkel imposed on the country one of Europe’s strictest lockdowns. A cautious easing began on May 6. And how have the country’s workers fared? Take a look at the chart below (from Bloomberg.com). That joblessness spike looks an awful lot like America’s. P.S. These figures don’t include millions of German workers not officially counted as unemployed only because of Bonn’s work-sharing programs, which has kept them nominally at work via wage subsidies. 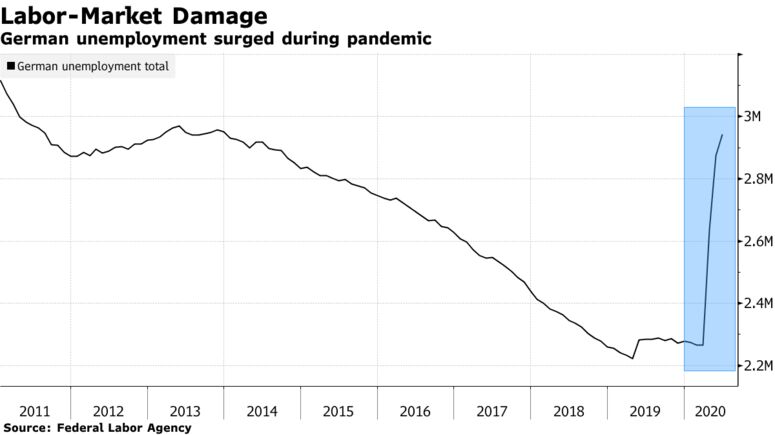 In other words, even Germany’s experience makes clear that if you favor maximum anti-virus efforts, like pervasive lockdowns, there’s no avoiding massive unemployment. And given the disease’s transmission rates – which may have worsened, possibly due more to mutation than to any reopenings, even as its never extreme lethality may be weakening – anyone insisting on the contrary deserves to be seen as just another cynical politician peddling fairytales.