It’s now been five days since I first heard it, but I still can hardly believe my ears because this utterance might have been the single dumbest and/or most ignorant combination of positions I’ve ever heard a leading political figure make. It came from Tom Steyer during the Democratic presidential debate last Tuesday night, and even though the California billionaire’s campaign seems to be going nowhere fast as the 2020 campaign nears its primary phase, it deserves to be spotlighted.

The first of the two statements in question? Steyer’s declaration that “On the first day [of his presidency], I would undo Mr. Trump’s [China] tariffs.” The second? “…I would declare a state of emergency on day one on climate.”

Why is this so mind-boggingly idiotic? Because as should be known by anyone who thinks he or she is qualified to be President, not only has China become by far the world’s largest emitter of the greenhouse gases held to be responsible for climate change, but as shown in the left-hand chart below, it started becoming an emitter in a class by itself at the turn of the century – i.e., right about the time when it was admitted into the World Trade Organization (WTO). And the most important effect of WTO admission was greatly complicating the challenge faced by all the world’s economies – including America’s – in using tariffs to curb the growth of China’s subsidy-fueled carbon-belching export-heavy industries. 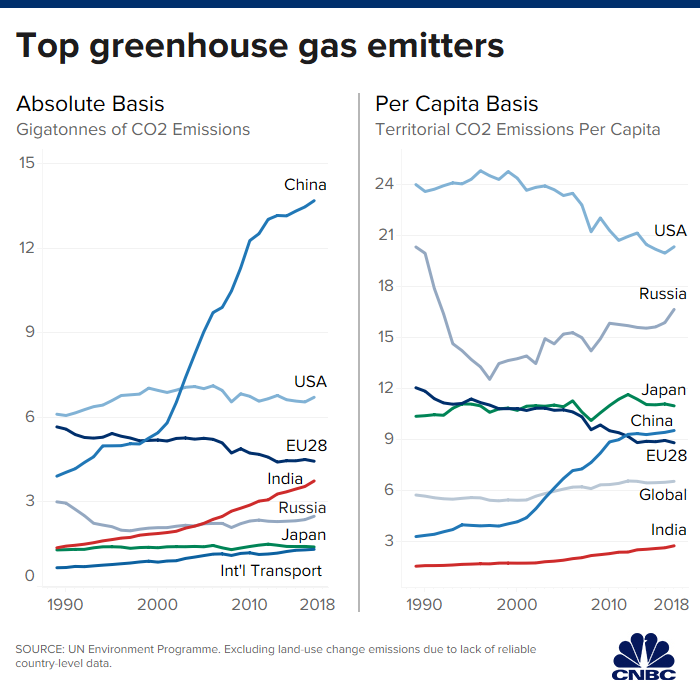 We don’t yet have data for 2019, but the chart also shows that the growth of China’s emissions began to slow (though they’re still growing faster than anyone else’s except India’s) as China’s economic growth (which has always been export-heavy) began slowing. Moreover, over the last year, as literally hundreds of billions of dollars worth of Chinese goods intended for U.S. markets have been hit by President Trump with stiff tariffs, China’s growth hit a 29-year low. Think that’s a coincidence? Think again, as between 2018 and 2019, China’s annual export growth crash dove from 9.9 percent to 0.5 percent in U.S. dollar terms. (The right-hand chart, which measures emissions on a per capital basis, displays similar trends.)

There’s nothing of course intrinsically wrong with Steyer’s passionate belief in the need to combat climate change. But his utter failure to recognize China’s immense contribution to the danger he sees makes embarrassingly clear – to put the kindest interpretation on the matter – that his knowledge base lags far behind his emotions. To the extent that other high profile climate activists repeatedly let China off the hook as well, they deserve the same criticism. And if this massive blind spot (or delusion) casts big-time doubt on Steyer’s qualifications to be President (which it should), it should have the same effect on all the other climate change resisters who display this shortcoming, too.

Though much more low-key than its Republican counterparts, last night’s Democratic presidential debate wasn’t simply the earnest, policy-focused wonk-fest being portrayed by so much of the chattering class – and the party’s own spinners. (Click on this link for a transcript.) Especially interesting were the clashing views of achieving political change that were voiced by front-runner Hillary Clinton and her leading challenger, Vermont Senator Bernie Sanders.

Clinton made the case for working conventionally through the political system, gridlocked though it seems to be, and securing whatever victories, even if modest, this state of affairs permits. Sanders served up the prospect of “a political revolution when millions of people begin to come together and stand up and say: Our government is going to work for all of us, not just a handful of billionaires.”

But don’t be fooled. None of the policy proposals introduced and debated in Las Vegas last night had anything to do with the only moment of real significance in the debate – and it was not only a game-changer, it looks like a campaign-changer. I’m talking about Sanders’ undoubtedly well-intentioned but bone-headed demand, “Enough of the e-mails. Let’s talk about the real issues facing America.” For Sanders’ belittling of the latest cloud of scandal surrounding the former First Lady, New York Senator, and Secretary of State may well have handed her the nomination on a silver platter.

Sanders allowed that his ostensible pitch for substance “may not be great politics.” That will soon rank as one of the biggest understatement in the last few decades of campaign history. You don’t have to love political mudslinging to recognize that much more often than not, winning political candidates draw sharp distinctions between themselves and their rivals that portray the latter in unflattering lights. And you don’t have to be a shallow, image-obsessed Beltway politico to recognize that voters vote not only on “the issues,” but on character.

So challengers (even with powerful momentum) facing front-runners (even struggling) simply can’t afford to pass up debate-level high profile opportunities to tout their own ethical record and attack their opponents’ – the more so when the policy gap is less than yawning, and when character is the main rival’s greatest weakness by far.

The loud applause Sanders won from the (understandably) partisan crowd strongly suggests that Democrats view the controversies surrounding Clinton as simply the latest smear attempts from the “vast right-wing conspiracy” that they believe has long targeted both Clinton and her husband. (And yes, this narrative has been decisively strengthened by House Majority Leader Kevin McCarthy’s breathtakingly stupid apparent confirmation of these suspicions.)

Yet it’s likelier that the doubts inevitably raised are in fact eating at party loyalists. Maybe they have simply undermined confidence about Clinton’s electability next fall. Maybe Democratic voters are more privately troubled than they let on in public by the questions raised by Clinton’s handling of national security-sensitive material, by conflict-of-interest charges stemming from the activities of the Clinton Foundation,  and by the multiple government and private sector jobs held by some of her senior State Department aides. Whatever the reason, or combinations, these Clinton missteps surely help explain her plummeting poll numbers among Democratic loyalists since they started making news.

As a result, Sanders’ priority during his first face-to-face meeting with his chief rival was to feed the party’s doubts about Clinton’s character. And if he was worried about lowering himself to the level of tawdry political hit men (and women!), Sanders could have told himself that the “Email-gate” monicker shamefully trivializes the central charges against Clinton. After all, her use of an unsecured private server for official State Department business practically invited disclosures of communications that could endanger national security. In addition, once Clinton was appointed to President Obama’s cabinet, the Foundation run by her and by Bill Clinton started looking like nothing so much as a machine for soliciting bribes from foreign governments.

It’s true that none of these allegations has been proven – plainly in part because so many thousand of the emails on Clinton’s private system have been destroyed and not yet recovered. But even if her conduct on both fronts stayed within the bounds of the law, the judgment it reflects is so shockingly poor that it does call her presidential qualifications into question. Consequently, Clinton’s troubles were, and remain, fair-game even for the most high-minded politician.

Sanders, however, not only dropped this ball. He all but pinned a seal of character approval on his rival, and in effect denied himself the option of bringing these matters up for the rest of primary season. And if Sanders can no longer even mention these possible Clinton transgressions and mistakes, the heat is now off her in terms of ethics and judgment – unless of course major new revelations emerge, or unless you think any of the three second-tier contenders will attack this dimension of the Clinton record.

In fact, although predictions are always hazardous, especially with the primaries still months off, barring the possibility of Clinton facing legal charges and consequences, the only major question surrounding the Democratic primaries now is whether Vice President Joe Biden joins the race. He’s much closer to Clinton ideologically than Sanders; therefore, he was well-positioned to present himself as “Hillary without the headaches” – of course without even having to voice this slogan. But when Bernie Sanders declared these headaches out of bounds for Democrats, to the full-throated cheers of the Las Vegas audience, chances are he finally sidelined the already ambivalent Biden as well.