Just went you think that many major U.S. business groups and their members couldn’t get any greedier or out of touch or both, check out this news on the immigration front: Some of the biggest of these organizations, containing most of the country’s most gigantic companies, have just sued the Trump administration seeking to freeze or block visas for immigrant workers in various job categories.

In other words, they’re trying to swell the American workforce with foreign workers at a time when literally tens of millions of Americans who want them can’t find jobs. And adding insult to injury, in the midst of this jobs-pocalypse, these companies are justifying their demands by claiming they face labor shortages. The obvious objective: pump up the national supply of workers, and thereby drive down the price – i.e., wage – these workers can command.

Worse, their contentions that they can’t find the employees they need continue to include the tech sector, even though the U.S. economy’s CCP Virus-induced downturn has been so bad that it’s spurring major job-shedding even in those industries and occupations. (The final word in the previous sentence is meant to remind that many non-tech businesses employ workers with tech specializations.)

According to the one of the major plaintiffs, the U.S. Chamber of Commerce,

“Our lawsuit seeks to overturn these sweeping and unlawful immigration restrictions that are an unequivocal ‘not welcome’ sign to the engineers, executives, IT [information technology] experts, doctors, nurses and other critical workers who help drive the American economy.”

Indeed, the plaintiffs insist that these kinds of workers are currently so scarce in the United States that if the restrictions remain in place, they’ll need to secure them by investing more in their foreign operations.

These shortage claims, whether involving labor or skills, are anything but new, and have been bogus even in good economic times – as proved in devastating detail by this recent Bloomberg.com analysis of the tech sector’s longstanding drive to import more workers under the H1B visa program. Thus you should be Laughing Out Loud at the notion that the human assets companies need simply don’t exist in the 50 states during American economy’s worst stretch since the Great Depression of the 1930s.

But the shortage-mongers (who I like to call collectively the Cheap Labor Lobby, since) aren’t only fighting common sense, or even simply a U.S. President’s broad authority to control foreign entry into the country. They’re fighting the data.

For example, CompTIA, which describes itself as “the world’s leading tech association,” reports that information technology “occupations in all sectors of the [U.S.] economy declined by an estimated 134,000 jobs” between June and July. And although the organization judges that such employment is up by more than 203,000 since the CCP Virus broke out in America, the 4.4 percent tech unemployment rate it cites – however much lower than the economy -wide jobless rate – is still much higher than the 1.3 percent it estimated in July, 2019.

In addition, the widely followed consulting firm Indeed Hiring Lab has found that between mid-May and late July, “tech job postings have trended below overall job postings” in the United States, and as the graph below shows, the gap is getting much wider. Also clear: Since mid-May, these tech job postings have been stagnant at this very low level. 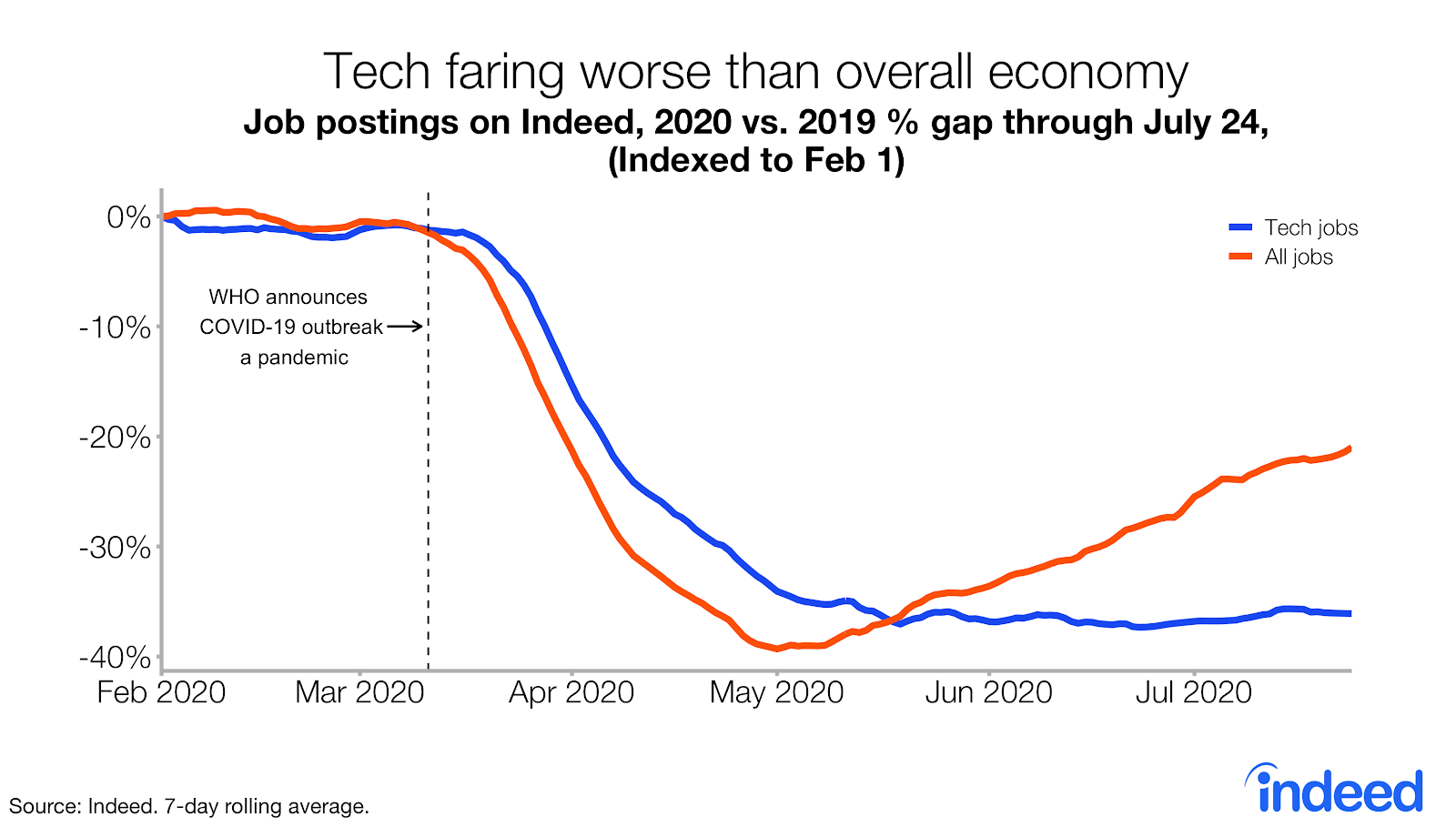 The information technology sector of course has long been one of the U.S. economy’s biggest bright spots, so far be it for this tech dinosaur to offer it advice. But I still can’t help but wonder how much better it could do if it didn’t spend so much time spreading misinformation about the country’s labor markets.