That was some chart in this week’s newest International Monetary Fund (IMF) update on the world economy on how different countries (including the United States) have fared when it comes to increasing or maintaining their manufacturing employment and their manufacturing output. (The detail in the below reproduction is tough to see, but for the original, see p. 5 in the third chapter of the Fund’s April World Economic Outlook.) 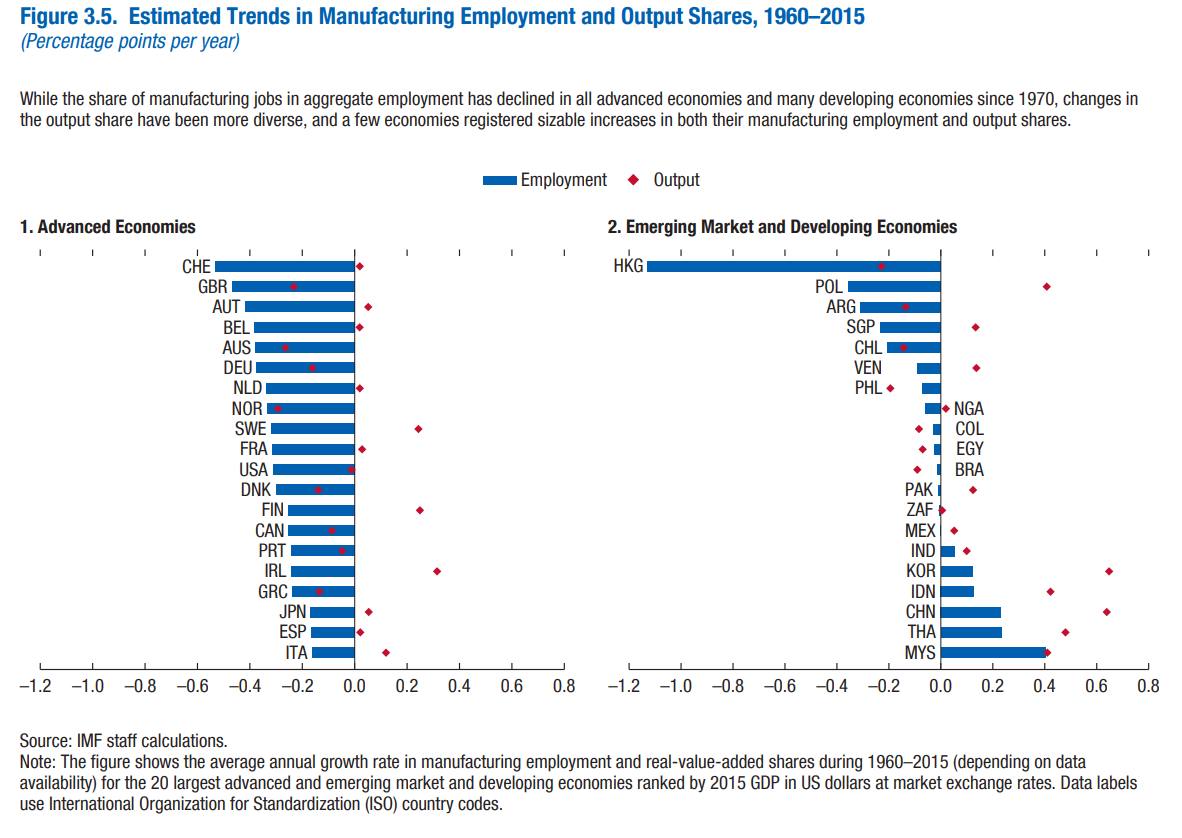 Looking at performance for 20 high-income countries and 20 low-income countries, it makes clear that, contrary to the conventional wisdom, there’s nothing unusual about national economies boosting manufacturing jobs as a share of total jobs, and manufacturing output as a share of total output, at the same time. So it’s a powerful retort to claims from American globalization cheerleaders that all over the world, in rich and poor countries alike, both manufacturing indicators are bound to fall in relative terms as economies inevitably evolve in more services-oriented directions.

And at the very least, it calls into question the notion that trade balances in manufacturing have little or nothing to do job loss in the sector in particular. For example, according to the chart, 22 of the 40 countries examined have boosted manufacturing as a share of their employment and their real value-added (a measure of output) from 1960 through 2015. And 11 of these were high-income countries, where the conventional wisdom says manufacturing’s economic importance is likeliest to shrink over any significant time frame.

Of these 22 countries, 17 ran surpluses in their combined goods and services trade in 2015. And nine were high-income countries.

Not that trade surpluses are automatic indicators of economic success: This group does include economically stagnant Italy as well as economically collapsing Venezuela. Spain, which experienced a terrible stretch during the last recession, is on this list, too – although it’s been a strong grower more recently. And there’s one country whose failure to qualify sure surprised me: Germany. Nonetheless, the countries that have excelled at manufacturing during this period also include major success stories like Chile, the Netherlands, Sweden, Ireland, Singapore, South Korea, Malaysia, and of course China (along with Japan, which is currently in the midst of its best growth stretch in nearly three decades).

Of course, the 1960-2015 time frame is still problematic at best, especially for China – since in 1960 it was still being run by leaders enamored with ideas like making steel in peasants’ backyard furnaces. But more recent comparisons between China and the United States look much more instructive – and supportive of the idea that a strong manufacturing trade performance is a great way to maintain robust manufacturing employment and production – and of its converse.

Let’s examine the post-2002 period – with the baseline chosen because that’s the year China actually joined the World Trade Organization, and began receiving WTO-style protection for its predatory, surplus-building trade practices. And for manufacturing output, let’s use pre-inflation value-added, since I wasn’t able to find inflation-adjusted data for China.

As for employment, Sinologist Nicholas Lardy of the Peterson Institute for International Economics (and no hardliner on China) has compiled Chinese statistics dating from 2003, and covering employment in the country’s cities. They show that manufacturing jobs as a share of this China total rose from 15 percent that year to 20 percent in 2014. In the United States during those years, manufacturing employment as a share of total non-farm jobs (the U.S. Bureau of Labor Statistics’ American jobs universe), dropped from 11.91 percent to 8.76 percent.

And nowhere have the manufacturing differences between the two economies been greater than in trade flows. For the first year of its WTO membership, China’s goods and services trade surplus (which was mainly in manufacturing) was $30.35 billion. By 2014, it was ballooned to $382 billion. During this period, the American manufacturing trade deficit shot up by just under 74 percent – from $362.64 billion to $629.53 billion.

So the new IMF chart (and related data) by no means ends the debate over whether trade balances impact national manufacturing employment and output. But if I was a globalization cheerleader, I’d sure hope they didn’t attract too much attention.

One of the seemingly strongest (and most reasoned) claims raised by his critics against Donald Trump’s promise to bring large numbers of manufacturing jobs back to the United States is that he’s ignorantly trying to buck a global trend. As claimed by many journalists and analysts, the Republican presidential nominee doesn’t seem to realize that, as one columnist recently put it, “manufacturing jobs are disappearing everywhere, not just in the U.S.” Even China, one of Trump’s biggest targets, allegedly hasn’t been immune.

The prominence of this push-back actually adds up to good news for Trump and his supporters. For what the numbers actually show is that, by the most meaningful measures, China has been adding jobs in its manufacturing sector in recent years, not shedding them.

Earlier this summer, Richard McCormack reported in his invaluable Manufacturing & Technology News findings from the Conference Board that between 2002 and 2013, Chinese manufacturing employment increased by nearly 28 million. That’s more than twice the total number of manufacturing workers currently left in the United States.

At the end of last year, moreover, the Peterson Institute for International Economics – which has been a strong defender of the trade policies Trump and others have attacked – posted even more compelling evidence for the health of manufacturing employment in the People’s Republic. China specialist Nicholas Lardy found that manufacturing payrolls in China’s cities, which he considers the most reliable Chinese data, not only nearly doubled in absolute terms between 2003 and 2015 (to just under 80 million). But these jobs also rose as a share of total Chinese urban employment from 15 to 20 percent.

Incidentally, a June Conference Board post contains more statistics pointing to American policy failure on the manufacturing jobs front. According to Joseph J. Minarik of the private Committee for Economic Development, most high income countries have indeed joined the United States as manufacturing employment losers in absolute terms from 1990 to 2014. But during that period, the United States was one of the biggest proportional losers. Further, from 2008 to 2014 – years during which American manufacturing supposedly was experiencing or verging on a renaissance – the U.S. manufacturing jobs performance lagged behind that of South Korea, Taiwan, Germany, and Canada.

Here are the charts Minarik used:

Trump’s positions on trade can be legitimately criticized on any number of grounds. But when it comes to describing global trends in manufacturing employment, he sure doesn’t look like the one who deserves the label “know nothing.”