As a firm believer that healthy democracies and vibrant economies need strong, independent labor unions, I’m happy to celebrate Labor Day each year, and pleased that Americans have been doing so now for 125 years. (Whether particular unions today are playing constructive roles is another matter entirely.)

And that’s why I’m also concerned that a recent Gallup poll on Americans’ views of unions contains as much troubling as encouraging news for organized labor.

Gallup’s summary emphasizes the positive, highlighting its finding that union approval is at a near-50 year high (64 percent, specifically). Moreover, that level is up sharply since the 48 percent all-time low recorded by Gallup in 2009. (Its figures go back to 1936, as shown below.) 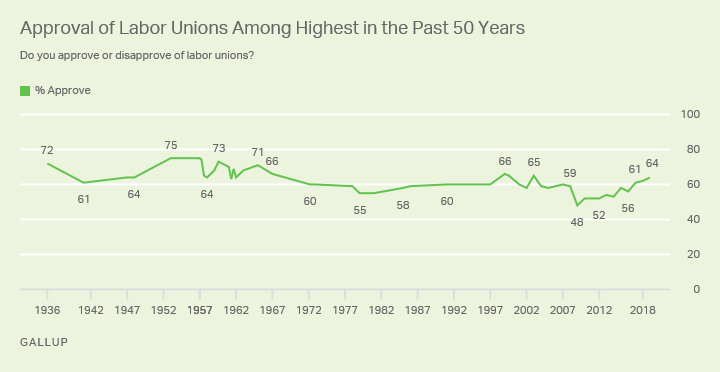 At least as good, as I see it: On a relative basis, Gallup found that pro-union views lately have grown fastest among most strongly among self-described Republicans – a group that’s never been known for union support. Yet whereas unions’ approval rate grew by 33.33 percent overall from 2009 to 2019, among Republicans, it improved by 55.17 percent (from 29 percent to 45 percent).

This trend surely reflects the shift in the GOP’s base toward Trump-style working class-oriented populism, and away from the rigid claims still made by too many of the party’s representatives in Congress and various types of Washington, D.C.-based hangers on that simply pursuing business’ favored small government/low tax agenda will automatically bring the greatest benefits to the rest of the economy – and will be appreciated by voters.

Political independents’ union backing improved more than the national average, too, during this period – from 44 percent to 61 percent – but the 38 percent shift of has been less dramatic than that for Republicans. Since Democrats have always been most sympathetic to unions, their support levels remain the highest in absolute terms (66 percent), but the post-2009 improvement has been the smallest (24.24 percent).

The problems lurking for unions in these poll results? Mainly, that public approval of unions seems to have little at best to do with unions’ actual membership rolls. As the Gallup results make clear, although union support nowadays is indeed at relatively high levels, they’ve always been on the high side (at least since 1936). Indeed, support levels generally have exceeded 60 percent, even recently.

Yet during this time, union membership in America has nosedived. According to the Economic Policy Institute – a progressive think tank that supports unions and receives funds from organized labor – unions represented about 22 or 23 percent of U.S. workers in the mid-1930s. (See the graphic below.) As of last year, that figure stood at just 10.5 percent. And if not for government workers’ unions, whose membership accounts for nearly 34 percent of public sector employees, the share would be much lower. (See this report by the U.S. Bureau of Labor Statistics for these data.)

Another big potential problem: During the last U.S. recession (which lasted from late-2007 to mid-2009), Gallup has found that public support for unions fell much farther and faster than during previous downturns. Optimists could note that the last recession was unusually deep, and that union approval ratings have rebounded strongly since. But during the Great Depression of the 1930s, which was much worse, union approval according to Gallup was much higher, and the Economic Policy Institute numbers show that union membership actually rose.

It’s also worth mentioning that this Gallup survey overlooked one big issue: Americans’ views of those government workers’ unions. That’s especially important because those public sector workers became a majority of U.S. union members in 2009, and remain so today. I’m not saying that this development has been either good or bad. But it does represent an historic milestone showing that the makeup of organized labor has changed markedly in recent decades. Does most of the public recognize this situation? Much of it? Do Americans regard government unions the same way they view private sector unions? Those are subjects Gallup and other pollsters need to explore. And there’s no reason to wait for next Labor Day. (Here’s a report on a poll dealing with some of these issues, but it’s eight years old.)