Although I’m hesitant for free speech reasons to support sweeping bans on corporate (or any special interest) money in politics, like many Americans, I suspect, I’d like to see a lot less of it. So I’m pleased to report some good news on this front: a study purporting to show that many of America’s largest companies (all members of the Standard & Poor’s 500 stock index), are reducing and even actually halting various types of political spending (including on lobbying).

The study, from the non-profit Center for Political Accountability, claims that 14 members of the S&P 500 have adopted “clear policies that prohibited the use of corporate assets to influence elections and asked third parties not to use company payments for election-related purposes.” Among them are some real surprises (at least to me) – like Wall Street giant Goldman Sachs, big defense contractor Northrup Grumman, energy kingpins Hess and Schlumberger, and IBM from the tech sector. (The full list is on p. 56.)

Just as important, the authors state that since 2015, “there has been a steady rise in the number of S&P 500 companies that have placed prohibitions on election-related spending.” Specifically, the study reports, between 2015 and so far in 2021, the number of these large, publically held companies that has stopped what the Federal Election Commission calls “independent” expenditures (spending for or against specific candidates not made in coordination with any such candidates or their representatives or political parties) has more than doubled – from 83 to 176.

As for companies barring non-independent spending on candidates, parties, and committees, they’ve increased from 84 to 136. Companies no longer contributing to “527 groups” (see here for the definition) are up from 65 to 118. Businesses that have had it with spending for or against various ballot measures have increased from 50 to 75. Those not contributing to organizations responsible for triggering the flow of “dark money” into American politics now number 71, versus 31 in 2015, and the growth in the number not even funding trade associations is from 20 to 47.

The Center attributes these trends mainly to business’ mounting reluctance to expose themselves to backlash from customers and shareholders for taking political stances in the current national environment of “unrest and angry political conflict” and “hyper-partisan politics.” The report adds that one reason companies feel more vulnerable is that many have been making public ever more information about their political and policy spending.

That greater transparency is definitely welcome. But I’m happier about the overall pullback in political spending. Not that all such activities are intrinsically concerning (much less should be outlawed). After all, if Big Businesses are being affected by existing public policies, or are bound to be, why shouldn’t they be able to argue their case to politicians and the public (especially when they make such lobbying, and the funding it requires, public)?

As the study also makes clear, however, although fewer Big Businesses are engaged in political and policy spendings, many more keep opening their coffers. Moreover, the report doesn’t say anything about actual corporate spending levels. In theory, although fewer big companies are contributing resources, those that still are may be spending much more. So it’s not like the corporate sector’s influence is going to be eliminated, or even close, any time soon.

But despite the legality and/or legitimacy of corporate money in politics and policy, there can’t be any reasonable doubt that these enormous resources give companies the kind of power that most individuals – and most other interest groups – can’t hope to match.

Therefore, I can’t help but believe that the less corporate actors putting their thumbs on the scales throughout Washington, D.C. and state and local capitols, the fairer and more representative our politics and government will be – and that the Center for Political Accountability’s findings are an especially terrific Thanksgiving gift.

One of the biggest stories in economics and politics over the past year has been the tax bill championed successfully by both the Trump administration and the Republican-controlled Congress. Economically it’s widely judged to have failed in its primary stated mission: encouraging more productive investment in the U.S. economy. And because it supposedly did little more than shower cash on already profit-rich corporations that overwhelmingly put it to supposedly unproductive uses like share buybacks and dividend payments (see, e.g., here and here), the American public rightly recognized it as a giveaway to tycoons and The Rich generally, and viewed it as one big reason to vote GOP candidates out of office in the recent midterm elections.

What a surprise, then, to come across evidence that the $1.5 trillion in business tax cuts so far have done a respectable job of working as advertised.

According to the Washington Post‘s Michael Heath, new research from Standard and Poor’s shows that since the tax package was passed, the firm’s well-known group of the 500 largest publicly traded U.S. companies have performed as follows:

>Through the first three quarters of this year, they’ve boosted share buybacks – which support the value of company stock and in the process enrich executives paid largely based on the increase (or decrease) in these stocks’ value – by 11.84 percent.

>During the same period, they’ve hiked capital spending (on new plant and equipment) by 19 percent.

>Over this span, they’ve boosted research and development spending by 34 percent.

>During the first eleven months of the year, their dividend payouts have been virtually unchanged.

When the entire American business universe is examined, the picture looks somewhat different – at least through the first half of this year. According to this summary of research from Goldman Sachs:

What’s noteworthy about these figures, though, is that they indicate that the larger, indeed multinational U.S.-based companies spent their tax windfalls more productively than smaller, largely domestically focused firms. That’s noteworthy because one of the principal objectives of the tax cuts was to persuade the multinationals to stop stashing so much of their earnings abroad and bring these monies back home to stoke growth and jobs. So it appears that, to a significant extent, that’s what they’ve done.

Of course, the real results of the effects of the tax cuts (or any other policy initiative) can only be assessed accurately not simply by comparing year-on-year rates of change in various metrics, but examining how these rates of change have differed (if at all) from those of years before the initiative went into effect. I haven’t yet located the data for most of these indicators, but the chart below combined with the Washington Post figures for capital spending for the S&P 500 makes clear that it’s been growing much faster since the cuts were passed than before. 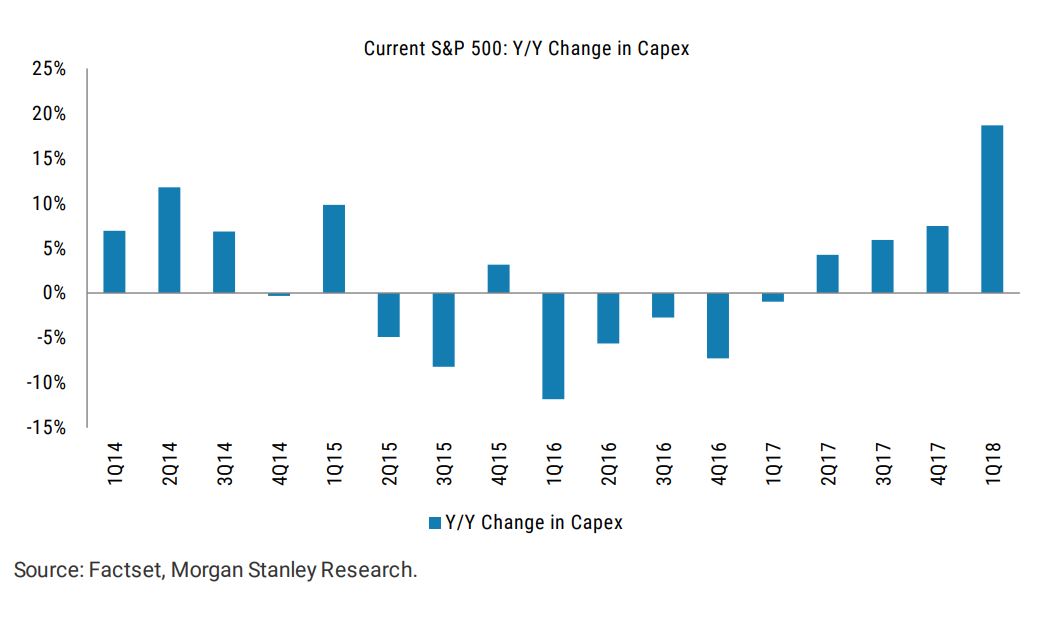 One area the Post didn’t look at, though, can’t be neglected: mergers and acquisitions. The numbers indicate that, measured by value, such activity increased much faster between 2017 and 2018 (for the first three quarters of the year) than between 2016 and 2017 – by 33.47 percent to 1.05 percent. (My sources are the 2016-18 data published by Factset.com.  Here’s its latest report.) The absolute numbers are sizable, too – the value of these transactions rose by more than $387.5 billion from January-through-September, 2017 to the same period this year. (Note: These figures are only authorized expenditures – but reportedly there’s evidence that 85 percent wind up getting made.)

But here (as elsewhere, for that matter) is where we run into a big complication that comes up whenever a policy initiative is judged: What changes are attributable to this move, and what changes to other factors? These other factors include other policies (like interest rate movements both announced and suggested by the Federal Reserve, or regulatory or trade policy changes), or existing or evolving business decisions on deploying capital (based on corporate judgments regarding likely customer demand that stem from the overall state of the economy or particular markets, and on how these situations are considered likely to change).

But all the same, a reasonable, defensible bottom line conclusion seems to be that productive business spending since the tax cuts’ passage is rising at a faster rate than before passage, and that the tax package has played a discernible role. Moreover, some of the other plausible reasons for this acceleration also are arguably attributable to Trump administration policies – at least in part.  Faster overall economic growth and regulatory reform are two examples. Trade policy might be a third.

Moreover, I’m making these points as someone who’s argued that President Trump’s prioritization of the tax cuts and Obamacare repeal was a major first-year mistakes, at least politically. Both should have taken a backseat to infrastructure building in particular. I’ve even expressed skepticism about the cuts’ likely economic impact.

But economically, the administration and its supporters seem to have had (and still have) a pretty good story to tell about the tax cuts – which could have bolstered their political appeal. Which means that a bigger mystery than the cuts’ actual effects could be why the administration told it so ineffectively.