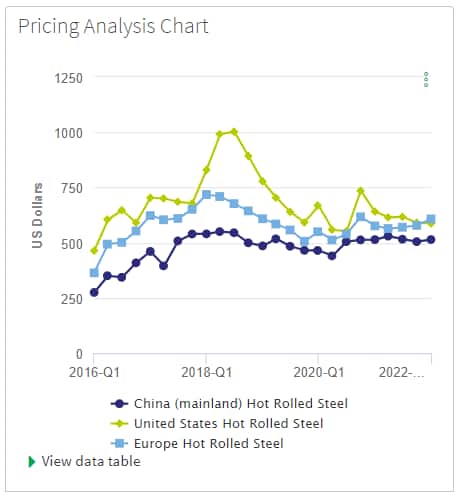 Just because none of the signers displayed the slightest ability to foresee the approach of an horrific national and global economic crisis is no reason to laugh off the letter released by former White House economists warning President Trump not to impose national security-related tariffs on steel imports. Instead, the letter should be laughed off because none of the signers appears to know anything about manufacturing competitiveness.

According to the letter, endorsed by fifteen former Chairs of the White House Council of Economic Advisers, steel tariffs of any kind “actually damage the U.S. economy” partly because they “would raise costs for manufacturers, reduce employment in manufacturing….”

If you think about it for just a minute, what these economists are really arguing is that American steel-using industries can’t possibly achieve reasonable levels of competitiveness without continuing supplies of a key input that are kept artificially cheap by massive subsidies from governments in China and elsewhere. That’s some recipe for preserving and extending free market and free trade practices around the world.

Even worse, however, is that even this dubious claim is directly contradicted by the best data available – including the newest multi-factor productivity statistics released by the Labor Department yesterday.

These data in particular strongly reinforce worries not only that American manufacturing is suffering major productivity problems, but that these problems have been worsening for many years. And just as important, they show that the steel users in particular have suffered from absolutely no shortage of artificially cheap steel.

For example, from 2009 (when the current economic recovery began) through 2015 (the latest data, multi-factor productivity in these industries (which measures the output resulting from a wide range of inputs, including materials like steel) has fallen by 2.17 percent. In durable goods industries as a whole (a super-sector that uses a lot of steel), it rose by 3.92 percent, which sounds OK. But it’s much weaker multi-factor productivity growth than these sectors achieved during the last recovery (which was considerably shorter): 22.27 percent.

What happened to steel imports from 2009 through 2015, measured by value? They surged by 71.87 percent. And these purchases were kept at that level mainly because during the last year of that stretch, steel imports sank by 20.91 percent. In other words, between 2009 and 2014, steel imports jumped by 117 percent – and presumably left over lots of steel for use by durable goods manufacturers the following year.

Steel imports soared during the previous, 2001-2007 recovery as well (by 156 percent). But whereas they increased at roughly double the rate during the first six years of the current recovery, steel users recorded multi-factor productivity gains that were 5.7 times greater.

During the long 1990s expansion (which technically lasted from 1991 to 2001), steel imports increased by only 28.67 percent. And even so, durable goods manufacturers managed a total productivity gain of 22.72 percent – just about the same improvement as during the import-happy early 2000s, even though import growth was only a seventh as great. And this productivity advance was orders of magnitude better than that of the current recovery, even though import growth has been less than a third as strong.

Now it’s true that durable goods productivity numbers have been boosted significantly by the spectacular performance of the information technology hardware sector (whose use of steel is relatively modest). But examining multi-factor productivity trends for much bigger steel users also yields head-scratching results if you take the former White House economists as gospel.

Transportation equipment is the only big steel-using sector where multi-factor productivity grew impressively during this period – by a total of 11.09 percent. But during the final year – 2014-15 – it dropped by 4.39 percent. And again, these companies were benefiting from plenty of artificially cheap steel.

So it’s clear that the former White House advisers’ steel trade analysis is anything but data-dependent. That leaves as their only anti-tariff argument their fears about setbacks in American diplomacy – where they possess no special expertise or even knowledge. Far better for these macro-economists to stick to macro-economics – though again, the overall U.S. performance here should inspire no confidence in their judgment, either.