If you want to start a (hopefully verbal only) fight about American politics, one good way is to tell a Democrat that his or her party – and especially its powerful progressive wing – has been abandoning the country’s private sector working class in favor of what New York Times columnist Ross Douthat just called “the winners of globalization, from wealthy suburbanites to Wall Street and Silicon Valley elites….”  (Here’s some polling evidence for this proposition.)

So it’s more than a little interesting that if you take this position, you’ve recently gotten some devastating ammunition from no less than one of progressivism’s leading intellectual lights – economist Stephanie Kelton.

Kelton has achieved renown for her pioneering “Modern Monetary Theory” take on economic policy. As she has explained, it holds that “Governments in nations that maintain control of their own currencies — like Japan, Britain and the United States, and unlike Greece, Spain and Italy — can increase spending without needing to raise taxes or borrow currency from other countries or investors.”

Naturally, Democrats of most stripes have seized on this argument to varying extents to justify running much bigger federal budget deficits to deal much more ambitiously with a whole host of national problems – to engineering an adequate recovery from the CCP Virus-induced recession to remedying major social and economic ills that they believe dangerously plagued the economy before the pandemic.

One aspect of Kelton’s views, though, has been widely ignored, and it’s this stance that led her last week to support explicitly measures with proven records of harming domestic U.S. private sector workers but with which the increasingly elitist Democratic Party has grown increasingly comfortable over the last decade or so – on trade and especially immigration policy.

The ignored Kelton stance: on inflation. As she has specified (in the column linked above), “Politics aside, the only economic constraints currency-issuing states face are inflation and the availability of labor and other material resources in the real economy.” And in the author’s latest column, she argues that it’s precisely the appearance of these threats today that require the Biden administration to embrace unfettered trade and mass immigration policies.

As Kelton puts it, the combination of (1) President Biden’s massive spending plans and (2) undeniable contraints on the nation’s capacity to supply all the new demand that they’ll create will produce worrisome inflationary pressures. Too many customers will be chasing too few products to buy, thereby forcing up the prices of the latter and possibly generating more economic problems than this new consumption solves.

Among the solutions she offers? Enabling the economy much more easily to satisfy all the new demand by accessing productive capacity from abroad. Thus she suggests both

“Repealing tariffs would make it easier and cheaper for American businesses to buy supplies manufactured abroad and easier for consumers to spend more of their income on products made outside of our borders, draining off some domestic demand pressures” and

“loosening legal-immigration policies, so that even once America nears full employment there would still be an adequate labor pool to meet the increased demand for workers.”

These arguments are entirely consistent with more conventional schools of economic thought – which have long insisted that the freest possible worldwide flows of goods, services, and people will lead to the greatest possible degree of prosperity for the world as a whole.

The problem, though, is that recent decades have taught that when the United States opens its economy wide to a world full of countries that still tightly protect their own markets, and when it opens its borders wide to enormous foreign populations with much lower living standards, American workers take major hits. Abundant research even in the mainstream economics community, for example, has documented the devastating impact of the “China shock” on trade, and the Trump years showed that when immigration curbs helped U.S. labor markets tighten to unprecedented levels, wages for low-income workers, who overall compete directly for employment against illegal aliens, rose especially strongly.

For many years, Kelton’s fellow Democrats and progressives have been increasingly determined to deny these immigration realities – even when employment levels have been less than stellar. And although private sector labor union-oriented Democrats and even progressives like Senators Elizabeth Warren of Massachusetts and Bernie Sanders of Vermont still champion what might be called America First trade policies, the party’s rank and file has grown much more enthusiastic about the pre-Trump version of economic globalization — as indicated by the below survey results from the Pew Research Center. 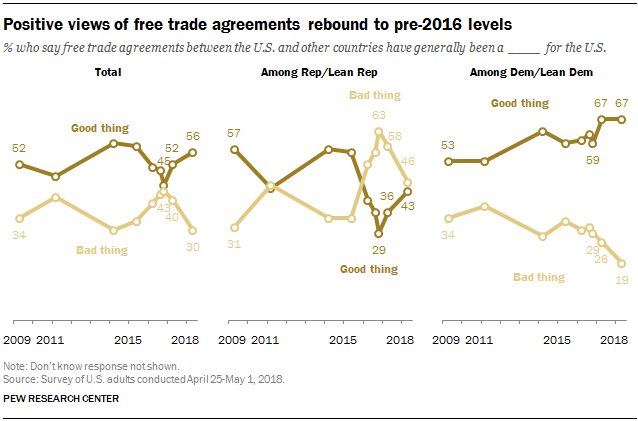 Even more curious, and troubling for the economy as a whole: Kelton sorely neglects the concept of productivity, and the importance of continually boosting the economy’s efficiency in order to boost living standards in sustainable, as opposed to bubbly, ways.

Kelton does write that “Over time, the Biden plan’s investments in our physical and human infrastructure will enhance our economy’s productive capacity, leaving us with a better educated and more productive work force, more efficient railways, less congested roadways, improved technologies and much else.”

But she also adds, crucially, “this can’t happen overnight. It will take years.”  Presumably, then she’d be OK with dropping the open trade policies at least to some degree.  What she misses, however, are the (further) productivity-killing effects bound to emerge during that period of re-enabling imports in sectors like manufacturing – which are central to the nation’s hopes for retaining sufficient productive capacity.

Indeed, she seems unaware that those manufacturing sectors that have been heavily dependent on artificially cheap imports have been major productiviy laggards. (The same holds for parts of the economy that have leaned heavily on the comparable crutch of immigrant labor – especially low-wage, low-skill immigrant labor).

Kelton of course is only one Democratic party thinker, and as she complained in her latest Times column, too many Democratic leaders – including the President – are still clinging to their supposedly outmoded views on spending and taxing and promoting U.S.-made manufactures.  And as mentioned, even within progressive ranks, her views on trade may not prevail against the Warren and Sanders perspective.

But it’s just as reasonable to believe that progressives hold the whip hand among  Democrats today on many issues, and Kelton played the biggest role in turning their spending-happy views into virtual party orthodoxy.  If her immigration and especially trade positions take the same course, the Democrats’ once unchallengeable identity as “the party of the common man” will become an example of transparently false advertising.

P.S. Special thanks to my Twitter friend who goes by the handle @RocCityBuilt for first alerting me to the trade and immigration material in Kelton’s latest article.