Whenever I’ve written about America’s security alliances lately, I’ve emphasized the unacceptable dangers they pose to the nation’s safety because they commit the United States to risk nuclear attack to defend countries that clearly now don’t belong on the list of U.S. vital interests – that is, countries so important to America that their independence literally is worth the complete destruction of major individual cities and even genuine armageddon.

Earlier this week, however, a reminder has appeared about another crucial reason to ditch the granddaddy of these alliances – the North Atlantic Treaty Organization (NATO). Revealingly, it also strongly bears out President Trump’s charges that U.S. allies in the region where they’re concentrated (Europe) have been shamelessly free-riding on the United States. Indeed, the new information also underscores how the allied defense deadbeats are not only ripping America off economically (which seems to be Mr. Trump’s main concern), but how their cheapskate defense budgets are fueling the nuclear risk faced by the United States.

The evidence comes in the form of a new survey of the populations of NATO member countries (including the United States) released by the Pew Research Center, and if you stopped with the headline (“NATO Seen Favorably Across Member States”) you’d understandably think that everything is just dandy in alliance-land. But check out the chart below, which for some reason doesn’t appear until the middle of the Pew report. Its central message should outrage the entire nation. 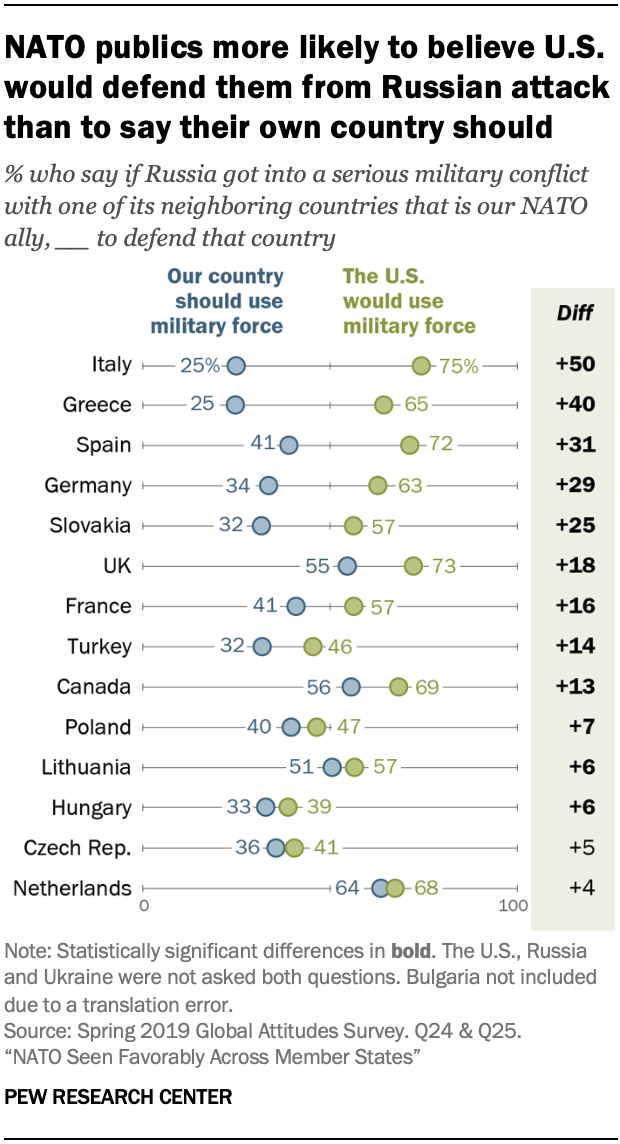 For it shows that although NATO populations are confident that the United States “would defend them from Russian attack,” they’re decidedly unenthusiastic about their own countries participating in the defense of another NATO member. Specifically, a median of 60 percent of residents of NATO Europe (along with Canada) countries express such confidence in America’s military (including nuclear) guarantee (versus 29 percent who are not so convinced). But by a 50-38 percent margin, they oppose their own country joining in.

The gap was widest in Italy (where only 25 percent favored helping defend another ally versus 75 percent believing that the United States would ride to its own rescue) and narrowest in the Netherlands (where the numbers were 64 percent and 68 percent respectively). The Italians also were the most confident in the United States in absolute terms, and tied with the Greeks for the least willing to help out. The only NATO members in which majorities supported both propositions were the Netherlands, the United Kingdom, Canada, and Lithuania.

Americans should be infuriated by these results for several intertwined reasons. First, the obligation to come to the defense of a fellow NATO member is at the heart of the alliance (and indeed of any alliance) and is spelled out in Article V of the NATO treaty. Although it’s true that members can always ignore legal obligations when push comes to shove, that’s long been much more difficult for the United States – because of its policy of stationing its own forces in many NATO countries (as well as in South Korea) to serve as “tripwires.” The idea has been that once they’re bloodied by attackers, and indeed about to be overwhelmed (because of their relatively small size) American Presidents will have no real choice but to respond with the U.S.’ equalizer – nuclear weapons.

This prospect was supposed to deter attack in the first place, and the (very) good news is that this strategy worked to keep the peace in Europe throughout the Cold War, and is still working. The bad news is that during the Cold War, the main European beneficiaries were countries whose independence was arguably vital to America – like the United Kingdom, (West) Germany, and France. Nowadays, the main beneficiaries are countries whose independence was never even during the Cold War viewed as vital to the United States – principally, the former Soviet bloc countries.

Yet although the stakes have shrunken dramatically, Washington continues to brandish the nuclear sword. And this risky American strategy remains in place – as it always has – because the European allies’ military forces have remained far too small and weak to repel a Soviet/Russian attack on their own, or with the help of modest U.S. non-nuclear forces. Worse, the Pew results also strongly suggest that if war did break out, American leaders could not for long even count on the help of allied forces even if it was provided initially. That’s an unparalleled recipe for disaster on the actual battlefield.

The Pew findings make the reason for this alarming situation glaringly obvious – the allies have skimped on their military spending out of confidence that the Americans would always answer their call. So why shouldn’t they save the big bucks that would be needed for genuine self-defense and use them for other purposes – like generous welfare states? Even better, the Americans would be left holding the nuclear risk bag, since once any conflict on the conflict escalated to that level, the nuclear conflict would be fought over their heads.

In addition, the Pew survey reinforces the results of a poll released last fall and alertly reported by my good friend Ted Galen Carpenter of the Cato Institute (who’s also just come out with an important new book on the subject).

Let’s be totally clear: This European approach has always made perfect sense from a European standpoint. But it not only makes no sense for the United States – it’s a strategy that creates the danger of national suicide because of decisions that still yoke the country’s fate to manifestly unreliable foreign publics.

Weirder yet: Avowedly America First champion President Trump has been steadily increasing the U.S. military presence in NATO’s most vulnerable – eastern European – members without having secured military spending increases from the other NATO countries that are remotely game changing.

It’s tough, therefore, to avoid the conclusion that America’s NATO allies are now giving Washington the broadest possible hint that it’s time for the United States to leave – because they’ve become utterly unreliable on top of their defense free-riding.  Why is the President acting as reluctant as any globalist to take it?

4 thoughts on “Our So-Called Foreign Policy: A Big Hint that America Finally Needs to Leave NATO”